Established on May 1942 to preserve integrity of the DFC. Awarded to any person who, wile serving with US Armed forces, distinguishes himself/herself by meritorious service while engaged in military operations involving aerial flight. Intended to recognize personnel who serve on crew or non-crew member status that requires regular participation. Later to recognize a specific number of combat sorties or strikes. Navy uses gold stars appurtenances attached to the ribbon to denote awards for heroism and bronze numerals are used to indicate additional awards.

Air Medal awarded to 2nd Lt. Theodore J MacDonald, Air Corp. Pilot of a B-17G who was taken prisoner when shot down over Berlin. 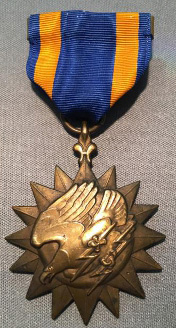 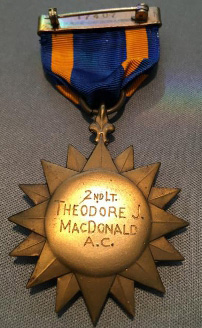 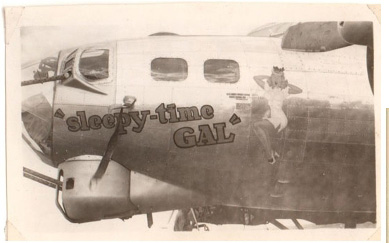 2nd Lt. Theodore MacDonald’s B-17 was forced down in a meadow near Nienburg on the Veser River. The Fortress, Sleepy Time Gal, was one of five aircraft lost by the 452nd Bomb Group on the first daylight mission to Berlin on 8 March 1944. MacDonald was taken POW and held in a camp until the end of the war. He suffered intense interrogation and torture ordered by a Luftwaffe officer, a former high school Colleague from Rochester, MN who repatriated to Germany.

In German POW Camps, rank and military protocol sustained to manage camp affairs during captivity. These wings were stamped out.