The NMCM was awarded to J.F Kennedy for saving lives during the downing of PT 109. 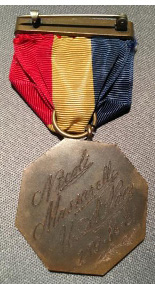 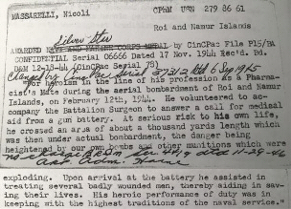 “For heroism in the line of his profession as a PM during an aerial bombardment of Roi and Namur Islands, on February 12th, 1944. He volunteered to accompany the Battalion Surgeon to answer a call for medical aid from a gun battery. As serious risk to his own life, he crossed an area of about a thousand yards length which was under actual bombardment, the danger being heightened by our bombs and other munitions exploding. Upon arrival at the battery he assisted in treating several badly wounded men, thereby aiding in saving their lives. His heroic performance of duty was in keeping with the highest traditions of naval service.“

* This award was later upgraded to a Silver Star.