Recognizes service members during the heightened alert period just prior to the start of WWII.

Authorized to military members who served between September 8, 1939 and December 7, 1941.

Navy issued clasps include “BASE” and “FLEET”, “SEA” clasp for Coast Guard. Army included the “*FOREIGN SERVICE*” clasp for service outside CONUS during the qualification period. 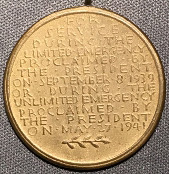