In 1911, Mexico’s revolution had spilled over to the US resulting in bloody campaigns with Poncho Villa and Emiliano Zapata North of the Mexican boarder.

The Mexican Service Medal (Est. Feb 1918) was awarded to Navy and Marines who served ashore or at sea during the Vera Cruz expedition from Apr 1914 – Feb 1917. 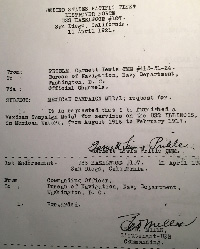