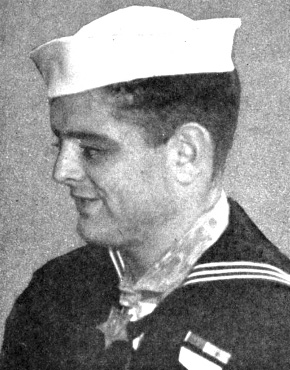 Navy hospital corpsman, Robert Eugene Bush, fearlessly braving the fury of artillery, mortar, and machinegun fire from strongly entrenched hostile positions, Bush constantly and unhesitatingly moved from one casualty to another to attend the wounded falling under the enemy's murderous barrages. As the attack passed over a ridge top, Bush was advancing to administer blood plasma to a marine officer lying wounded on the skyline when the Japanese launched a savage counterattack.

At age 18, he was the youngest U.S. sailor to receive the Medal of Honor in World War II.