Indian wars was a variety of campaigns to prevent native hostilities from 1865 through 1891. Although, the Indian Campaign Medal was issued by the Dept. of the Army, the medal was also provided to Navy and Marines who volunteered as militia men and in the naval engagement at Battle of Lake Okeechobee where 96 Navy and Marine deaths were reported. About 4,000 numbered strikes issued. Indian Wars Medal was established by Congress in 1905 and awarded retroactively.
Sgt. Samuel Meddaugh enlisted 6 April 1972 Into the 6th Infantry. 6th Infantry is known for battles with the Apaches, Little Big Horn, Cheyennes, and Pine Ridge. 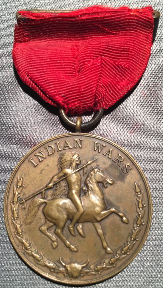 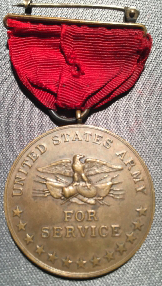